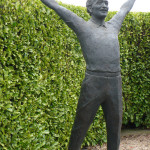 “Forty is the old age of youth; fifty the youth of old age”—Victor Hugo

So what does “old” actually mean? We’re not talking the Middle Ages, of course, when life expectancy was commonly in the ‘20s or ‘30s (thus marriages between 12-year-olds).As late as the mid-20th century, being among the elderly generally meant reaching the ‘60s. And today? Well, according to a survey by UBS AG released this week and reported in an InvestmentNews story by Trevor Hunnicutt, “wealthy investors don’t see themselves as ‘old’ until they’re 80, and that perception is driving how they save for retirement.” Excerpts from the article:

“As life expectancy stretches, about seven in 10 investors don’t see themselves as old until they can no longer live in their homes or drive, rather than when they retire or reach milestone such as having grandchildren or developing ailments such as becoming forgetful.

“A majority of investors don’t describe themselves as old until over the age of 80, when nearly eight in 10 consider themselves elderly. Fewer than half of 70-something investors describe themselves as old. (The average American man lives to 76; the average woman lives to 81.)  The survey was taken Sept. 24 to 30, amid heated political wrangling over federal spending. Though they have little faith in politicians to have a positive impact on the economy, rising home prices led to greater optimism among investors about their own holdings. While they ranked politics as their greatest concern, nearly two-thirds described their personal finances as excellent or very good, virtually unchanged in six months, according to the UBS report.

“Nearly a quarter of the investors surveyed make all of their parents’ financial decisions, according to the survey, while more than eight in 10 consult their adult children on their finances at least occasionally. UBS’ results are based on a quarterly online survey of 2,319 Americans with at least $250,000 in investible assets and some responsibility over their financial planning. “