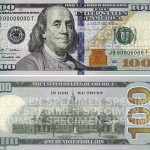 Everyone likes to generate more cash- and thanks to The Federal Reserve, you can look forward to the new facelift on $100-bills. Beginning in October, America will have a new $100 Euro-style bill which changes color and has super high-tech security features. The Federal Reserve said yesterday that it will begin circulating the $100 bill which has been redesigned with high-tech security features this fall – more than two years after its initial target. While Ben Franklin’s face remains, there’s a new security strip next to it, embedded in the fabric, not printed. Other features include:

Bell in the inkwell changes from green to copper when titled

Portrait watermark visible from either side

New vignette back of Independence Hall

Take a look at CNN’s video on the topic; it’s a lot of fun. So let’s keep compounding interest on your retirement plans so there will be plenty of greenbacks when it’s time for retirement.