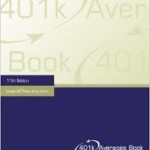 It may not be as commonly known as, say, the Blue Book (for those interested in pricing cars) or the Red Book (a pharmaceutical reference guide), but for investors, The “401K Averages Book” should have your attention.

And according to its latest edition, writes Marlene Y. Satter in an interesting benefitspro.com piece headlined 401(k) fees remain flat, mostly, “underlying investment fees dropped but the average overall costs for small 401(k) plans remained flat over the past year.” Other excerpts from the article:

“For the average small retirement plan, with 50 participants and assets of $2.5 million, costs came in at 1.44 percent.

“The costs for eight of the nine asset classes tracked by the publishers of the book fell on a year-over-year basis. But increasing exposure to investments with higher costs, such as U.S. equities, target-date funds and international investments, resulted in plan costs that stayed flat or climbed a single basis point.

“For small plans, fees attached to large U.S. equities fell from 1.40 percent to 1.38 percent, according to David Huntley, co-author of the book. Huntley added that target-date funds also fell from 1.35 percent to 1.32 percent. But increases in plan balances have also seen increases in exposure to more expensive investments, and that has been responsible for the flat or increasing costs overall.

“For large retirement plans, those with 1,000 or more participants and at least $50 million in assets, total plan costs were flat at 1.03 percent amid falling investment fees for the underlying investments. Large U.S. equities saw fees fall from 1.05 percent to 1.03 percent, while target-date funds dropped from 0.98 percent to 0.96 percent.