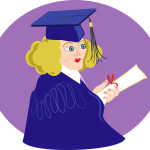 You scope out the price for a new car and it’s called “sticker shock.” And the financial cost of putting your child through college might be described as “diploma shock.” In other words, as Sue Grossardt writes in a superb piece for usatoday.com, “college planning is a big deal. In fact, for many families, paying for college is one of their biggest investments. With college expenses and student debt on the rise, wise parents engage in candid conversations on this hot topic earlier, rather than later, with their college-bound kids. How early? As soon as middle school.” Here are other excerpts from Grossardt’s article—“some tips to get the conversation started:”

“The cost of a four-year degree — including tuition, fees and living expenses — has exploded.  Public school cost 129% more in the 2013-14 enrollment year adjusted for inflation compared with 30 years before, according to the College Board. And private school cost 125.7% more. Meanwhile, the U.S. median household income rose just 15% in that same 30-year time frame, Census figures show.

“Parents shouldn’t shy away from sharing those financial realities with their teens. And their heart-to-heart chat may include divulging the balance in the 529 plan and other investment buckets set aside for college.

“[One way for students to do that] is by taking an active role in researching the cost of each school they are interested in. Picking a college needs to be a rational choice, but teens with big dreams might not see it that way.

“Parents shouldn’t feel guilty about giving kids a reality check when it comes to choosing the college of their dreams. Big decisions in life have limits.

“Employable degrees have become the buzzword that can be difficult — but necessary — to talk about. Help your teen discern the difference between a hobby and a career.  For example, let’s say that your student is naturally artistic.  Talk about whether this talent will serve them well as a career path or a creative outlet. Making decisions like these will help them become a well-rounded person with multiple interests while still being able to pay the bills.

“What are the most employable degrees? According to the National Association of Colleges and Employers, students who choose business, engineering and information technology generally will be in greater demand.

“Encourage your student to explore interests, college majors and career options early in high school to put them on the path to graduate in four years. That saves both time and money.

“How many of us, at 18 years of age, knew exactly what we wanted to be when we grow up? The reality is that the process of uncovering that is part of growing up. Having some tough talks ahead of time could help limit the cost of that lesson.