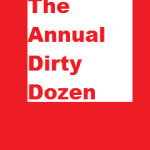 WASHINGTON — The Internal Revenue Service [on Feb. 1] issued a filing season alert warning taxpayers to watch out for identity theft at tax time and highlighted the crime as the first scam in the agency’s “Dirty Dozen” series.

Over the course of the past year, as part of the Security Summit initiative, the IRS partnered with states and the tax industry to enhance coordination and create a more secure system for taxpayers.

Security Summit participants, including the IRS, will regularly share details of fraudulent schemes detected this season so industry and government have the same information and can adjust accordingly to provide increased protection. Many changes will be invisible to the taxpayer, but the more than 20 shared data elements are critical to making sure the IRS, states and industry can better verify the taxpayer and the legitimacy of the tax return.

“Our collaborative efforts with the Security Summit have given the IRS additional tools to stop fraudulent returns at the door,” said IRS Commissioner John Koskinen. “The criminals continue to look for increasingly sophisticated ways to breach the tax system. While the IRS has improved prevention and detection efforts, we’re calling on taxpayers to protect their private information so thieves can’t steal personal data to file fraudulent returns.”

The IRS also joined with industry and states on a public awareness campaign to provide taxpayers with easy tips to better protect themselves.  The “Taxes. Security. Together” campaign includes YouTube videos, Tax Tips and fact sheets to help taxpayers stay safe online.

The Dirty Dozen is compiled annually by the IRS and lists a variety of common scams taxpayers may encounter any time during the year. Many of these con games peak during filing season as people prepare their tax returns or hire someone to do so.

“We urge people to use caution when viewing e-mails, receiving telephone calls or getting advice on tax issues because scams can take on many sophisticated forms,” Koskinen said. “Keep your personal information secure by protecting your computers and only giving out your Social Security numbers when absolutely necessary.”

Tax-related identity theft occurs when someone uses your stolen Social Security number to file a tax return claiming a fraudulent refund. While the IRS has made significant strides over the past several years to address this issue, it remains a top concern for the IRS, which is why identity theft remains on the Dirty Dozen list again this year as the IRS works to protect taxpayers and help victims.

In the most recent three fiscal years, Criminal Investigation (CI) helped convict approximately 2,000 identity thieves. In fiscal year 2015, the IRS initiated 776 identity theft related investigations, which resulted in 774 sentencings through CI enforcement efforts. The courts continue to impose significant jail time with the average months to serve in fiscal year 2015 at 38 months — the longest sentencing being over 27 years.