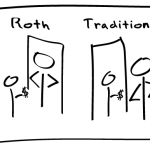 “Is it better to save for retirement in a Roth IRA or a traditional IRA?” asks Robert Berger in a comprehensive usnews.com piece. “Spend a little time researching this question, and you’ll learn an interesting mathematical truth: If your tax rate is the same when you make contributions as it will be in retirement, there’s no difference between a Roth and traditional IRA (or 401(k) for that matter).”

Berger continues: “This mathematical truth leads to a quandary: How can we possibly know today what the tax rates will be decades from now? We can’t. Not only is the tax code likely to change, but our income levels are likely to change, too. But let’s not abandon all hope of figuring out the best way to save for retirement.” In the first of two blogs drawn from Berger’s superb piece, he outlines “five things we can know or control, at least to a point, which can help us make this important retirement decision:

“In addition, many people plan to live in low income tax states during retirement. For example, many retirees move to Florida, a state that has no income tax. Those living in high tax states who plan to retire in tax-friendly jurisdictions can make reasonable assumptions about tax rates in retirement in deciding which account type is best for them. Remember, we don’t need to know our exact tax rate in retirement. We just need to make reasonable assumptions as to whether it will be higher or lower than our current rates.

“Marginal versus effective tax rates. Comparing a Roth to a traditional retirement account requires some mental gymnastics. It’s not enough to simply compare marginal tax rates at the time of the contributions with marginal rates in retirement. Here’s why: When pre-tax contributions are made, they reduce taxable income at the margin. However, these contributions may move a taxpayer into a lower tax bracket. As a result, some thought must be given to the actual tax savings, which could straddle two tax brackets.

“The key is to think beyond marginal tax rates. Taxes paid in retirement, even if the marginal rate is the same, may result in a lower actual tax rate if the withdrawals span multiple brackets.

“Those who will receive significant taxable income from other sources will end up paying higher rates on retirement account withdrawals. But as the number of companies offering pensions declines, many retirees will be limited to Social Security as the only other source of income. The key is to assess how this other income, from whatever sources, will increase the tax rate applied to retirement account withdrawals.”