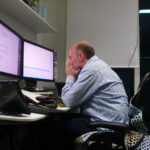 “Working longer is becoming the go-to retirement plan for millions of older Americans who report they expect to keep working well into their retirement years,” writes Steve Vernon in another of his superlative MoneyWatch pieces for cbsnews.com. “Many say they need the money and benefits, and most likely they’re right. But how many older workers are working at ‘good’ jobs, compared with those who are desperately holding on for purely financial reasons? It turns out that defining ‘good’ and ‘bad’ jobs can have many subtleties, and it’s highly individualized to people’s goals and circumstances.” The article is headlined Older workers and the search for “good” jobs, and here are other major excerpts:

“The Schwartz Center for Economic Policy Analysis (SCEPA) publishes a monthly report on unemployment for workers age 55 and over. Its August ‘older worker at a glance’ brief noted that the unemployment rate for these older workers, as reported by the U.S. Bureau of Labor Statistics (BLS), is 3.5 percent, a historical low. This low rate is often cited as evidence that older people can continue working if their retirement income falls short.

“But simply focusing on this rate can be misleading. Note that this particular measure counts those who are unemployed as people without jobs who’ve been actively looking for work in the past four weeks.

“The SCEPA brief goes on to report that an increasing share of older workers are in ‘bad’ jobs — 29.1 percent in July 2016 compared to 27 percent in July 2006. SCEPA defines a “bad” job strictly in financial terms. It’s a job for people working 30 hours per week or more that pays less than two-thirds of the median wage for such workers. In July, this median wage was $880 per month.

“Among the many other aspects for defining a good job are a harmonious work environment, friendly colleagues, flexible schedules or a short commute. A recent report by Merrill Lynch and Age Wave looked at the reasons retirees cited as motivation for working:

“Note that financial need ranked well below other considerations. As a result, it’s possible that many older workers may intentionally accept lower-paying jobs in exchange for increasing their fulfillment and freedom. In fact, many retirees report that they’re happy even though they have less income compared to when they were working previously.

“If you’re in your mid-50s or early 60s, now’s the time to start planning for your retirement years, including estimating your sources of income and determining how much you’ll be relying on work. If you need to continue working in your retirement years, it will take some planning and effort, including taking care of your health, updating your skills and nurturing your contacts.

“But doing so will increase the odds that you’ll find good work and have a good life in retirement.”