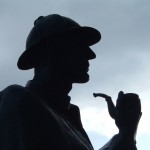 Savvy gamblers like to “play the percentages,” theatrical agents of a certain (pre-inflationary time were known as “10 per centers” and Sherlock Holmes, you may remember, famously had his “7% solution.”) For those contemplating retirement in general or portfolio withdrawals in particular, whether Baker Street Irregulars or just regular Main Street citizens, there’s the so-called “4% rule.” But just how golden is that rule? The answer is by no means elementary. In an excellent New York Times piece (included in the newspaper’sspecial retirement section), Eilene Zimmerman considers the issue. The article is excerpted in 2 blogs:

“One thing most retirees want to avoid is outliving their money. Since the mid-1990s many of them have relied on a staple of retirement planning known as the 4 percent rule to avoid that. Although the name says 4 percent, the rule is that if retirees withdraw 4.5 percent of their savings every year, adjusted for inflation, their nest egg should last 30 years, the length of time generally used for retirement planning.

“That percentage was calculated at a time when portfolios were earning about 8 percent. Not so anymore. Today portfolios generally earn much less, about 3.5 percent to 4 percent, and stocks are high-priced, which is linked historically to below-average future performance. Many financial advisers are rejecting the 4 percent rule as out of touch with present realities.”

Says the article, the rule was created in 1993 by Bill Bengen, financial planning professional, “who examined every 30-year retirement period since 1926, reconstructing market conditions and inflation. He identified 1969 as the worst year for retirees because a combination of low returns and high inflation had eroded the value of savings. Using that as his worst case, Mr. Bengen tested different withdrawal percentages to see which one would allow savings to last 30 years. At first 4 percent worked, he says, based on a portfolio with a 60/40 split between large-cap stocks and intermediate-term government bonds. After research, Mr. Bengen decided to add small-cap stocks to the mix and revised his recommendation to 4.5 percent. The 4 percent name, however, stuck.

“Michael Finke, a professor in the department of personal financial planning at Texas Tech University in Lubbock, is a co-author of a paper critical of the rule, “The 4 Percent Rule Is Not Safe in a Low-Yield World.” He says Mr. Bengen’s rule doesn’t acknowledge the new economic reality of prolonged low returns. ‘There haven’t been any historical periods that look like today’, Mr. Finke said. ‘We’ve never had an extended period where rates of returns on bonds have been so low and valuation on stocks so high’.

“Strict application of the rule also does not factor in how important returns are in the early years of retirement, something known as the sequence of returns. ‘The first years of returns have an outsize impact on your retirement savings sustainability’, Mr. Finke said. He used an example of $500,000 in savings earning zero for the first five years of retirement. Applying the 4 percent rule (that is, 4.5 percent), you will withdraw $22,500 a year. At the end of five years, your portfolio is left with $387,500. If returns go up, they are being earned on a smaller amount of savings than if you had gotten positive returns those first five years or had withdrawn less, Mr. Finke said. ‘You have less money to use to earn money for the next 25 years’.

“High inflation early in retirement can have a similar impact, especially if earnings are also low. Taking out more money just to keep up with the rising cost of living will accelerate the depletion of savings, Mr. Finke said. Although the inflation rate today is 1.5 percent, historically it has been about 5 percent, he said.”