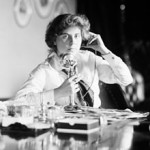 “Both men and women are facing a retirement crisis,” writes Paula Aven Gladych in a revealing benefitspro.com piece, “but it disproportionately affects women, according to the Pension Rights Center.” Her column continues:

“The retirement income deficit is $6.6 trillion, which is the gap between what people have currently saved and what they will need to retire comfortably. Women continue to be hit the hardest, even though more women are working than ever before.

“Older American women are still twice as likely as elderly men to be living near or below the federal poverty line. They also are less likely to have access to reliable retirement income, according to the Service Employees International Union, which released a video on the topic for Women’s History Month.

“Women still earn lower wages than men and are more likely to work part-time or take time off to care for their children, parents or disabled relatives, which can further lower their earnings. Women also make up the majority of low-wage workers, and low-wage jobs, like restaurant and retail, which typically don’t offer retirement savings plans to their employees.

“The Government Accountability Office released a report in February that examined marital status and retirement income. It found that switching from defined benefit pension plans to defined contribution plans had put many women at risk. It found that 56 percent of Social Security recipients are women over the age of 62 and that women make up 68 percent of recipients over the age of 85.

“Social Security provides at least 90 percent of income for almost half of women 65 and older and the average Social Security benefit for women is about $13,000 a year.”