Seven out of Ten Americans Likely to need Long-term Care 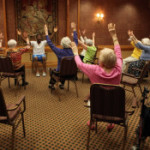 “Few things are certain in life, although the need for long-term care comes pretty close. Seven out of 10 Americans are likely to need long-term care at some point in their lives, according to government statistics,” writes Kelley Holland in an excellent piece for cnbc.com headlined Finding long-term care without breaking the bank. “Yet most Americans are unaware of those odds. In a recent survey of people age 45 to 64 by PlanBeyond, a website offering financial, health care, and legal advice for the end of life, two-thirds underestimated the likelihood that they would require long-term care. More worrisome, perhaps, was that 33 percent of those age 55 to 64 said they would rely on Medicare to pay for long-term care, even though Medicare generally does not cover those costs.” Other excerpts from the article:

“As a result, many people approaching retirement age are less likely to plan effectively for long-term care, and may wind up putting themselves at financial risk. People age 55 and over accounted for almost 1 in 4 medical bankruptcies in 2013, according to research by Nerdwallet.

“Some 43.5 million American adults served as unpaid caregivers over a 12-month period, according to a 2015 report published by the AARP Public Policy Institute. And almost half of family caregivers spend more than $5,000 a year on expenses related to caregiving, a Caring.com survey found.

“It may become harder to turn to family members in the future, though, as people start families later and have fewer children. The mean age when American women now have their first child is 26, up from 25 in 2000.

“Going outside the family for care can be punishingly expensive, however. In a pricey city such as New York, a year in a semi-private room in a nursing home can run upwards of $180,000, according to a survey by Genworth. (The cost is lower in a Midwestern state such as Ohio, but the state median of over $76,000 is hardly a bargain.)

“The good news is that you have various options to pay for long-term care if you plan ahead.

“Perhaps the most obvious way to cover your costs is with long-term care insurance. These policies may pay for everything from occupational therapy to respite care and nursing homes, but they are not cheap.

“And the cost of long-term care insurance has been rising as insurers have faced rising life expectancies. Some have stopped writing policies, and that has also fed a rise in prices. The rate for a 55-year-old couple with normal health is about $2,466 per year. For a couple age 60 it’s $3,381, according to the American Association for Long Term Care Insurance.

“Given those figures, it’s not surprising that only about 13 percent of single people buy long-term care insurance.”