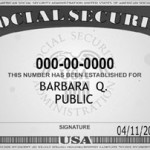 In a washingtonpost.com piece, Rodney Brooks, one of our best financial writers, begins by saying “I seldom write about Social Security without a huge response from readers. That’s not a bad thing. It seems that just about everyone has an opinion about Social Security – especially when it comes to the decision on when to take it. Many financial advisers recommend that people wait until 70, very few do. In fact, most people don’t even wait until full retirement age, and end up taking it as soon as they are eligible – at 62. Well, a new survey says that, given the chance, a quarter of Social Security recipients would take it later than they did. But that also means that most would not change their decision – for a variety of reasons.”

In the article—headlined A quarter of recent retirees would delay Social Security if they had a do-over—Brooks reports on the “third annual  Nationwide Retirement Institute survey of nearly 1,000 people 50 or older, approaching retirement or retired, [which] found that 23 percent would change when they started drawing Social Security to a later age. And 24 percent of recent retirees said their benefits were less than expected.” Brooks’ excellent piece continues:

“Of those who said they would not change when they started receiving benefits, 39 percent said they were forced to start drawing benefits by a life event.

“Of the people who would not change their decision on when they took benefits, the reasons varied.