WHAT’S IN YOUR (RETIREMENT) WALLET? 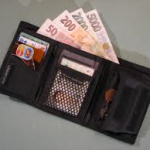 By now we’re all familiar with—OK, maybe even tired of– the Alec Baldwin (and more recently Samuel L. Jackson) Capital One TV commercials, ending with the tag line “What’s in your wallet?” Well, as long as they asked, the answer for many Middle Class Americans is, never mind their wallets because the better question might be, what’s in your retirement account? According to a Wells Fargo survey, the answer for a large percentage of them is, not nearly enough—demonstrated by the fact that a shocking 42% of the respondents say that paying the bills and saving for retirement is ‘not possible.’ A Wells Fargo news release included other eye-opening statistics gleaned from the survey. Here are excerpts:

“More than half the middle class (59%) are very clear that their top day-to-day financial concern is ‘paying the monthly bills’, an increase from 52% in 2012. Saving for retirement ranks a distant second place, with 13% calling it a ‘priority’, as four in ten middle class Americans (42%) say saving and paying the bills is ‘not possible’, As a result, 48% are not confident they will be able to save enough for a comfortable retirement, and 34% of the middle class say they will work until they are ‘at least 80’ because they will not have saved enough for retirement, up from 25% in 2011 and 30% in 2012. These results come from the latest annual Wells Fargo Middle-Class Retirement Study, a telephone survey conducted by Harris Interactive of 1,000 middle class Americans between the ages of 25 and 75 and interviewed July 24 to August 27, 2013.

“According to the 2013 study, about half (52%) of the middle class between the ages of 25 and 75 say they are ‘confident’ they will have enough saved for their retirement. However, less than a third (29%) say they have a written plan for their retirement. For those who have a written plan, 70% describe themselves as ‘confident’ in their future retirement versus 44% who do not have a plan. Ninety-one percent of the middle class who have a plan for their finances in retirement agree that they have the ‘willpower’ to save for retirement versus 75% of those who do not have a plan.